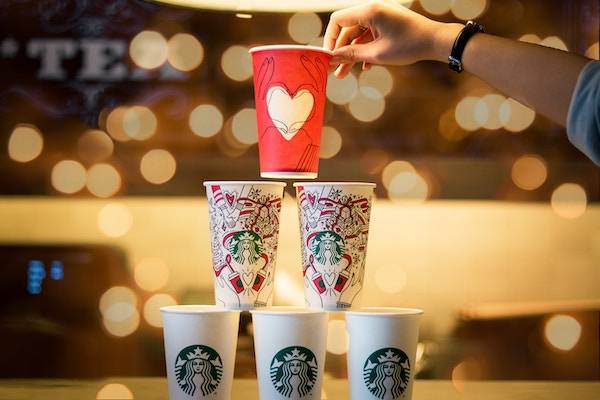 If you’ve been following us for a while, you already know we’re working on a series of guides on how you can enjoy a quick snack at all the major fast-food chains out there without compromising your ketosis.

So far, we got a guide on keto at McDonald’s, Burger King, Wendy’s, and Taco Bell.

Can you guess what they all have in common?

That’s right. There’s a whole lot of math in those guides.

Calculating your BMR, TDEE, daily carb limit, everything has to be on point and to the T—because a single gram of extra carbs can wreck your ketosis in a matter of minutes.

Well, today we bring some good news to brighten your day: you won’t need any math when visiting Starbucks on keto.

WHY THERE'S LITTLE SENSE IN COUNTING YOUR CARBS AT STARBUCKS

The great part about visiting Starbucks on keto is that the dividing line between the keto-friendly and the keto-dangerous drinks is just plain obvious.

As a result, you can safely enjoy the keto-friendly drinks but will have to avoid the dangerous options at all costs. Why exactly?

Even a single sip of a drink rich in carbs can cancel your ketosis due to the sudden spike in blood glucose. Yes, even if you stay in your estimated carb limit.

In other words, visiting Starbucks on keto is either an all-in or a total no-go, depending on what you order.

As you know, plain coffee without any extra ingredients (milk, syrups, etc.) is the perfect low-carb drink. Delicious and energizing, it won’t mess your ketosis no matter how much you drink of the stuff (although moderation is still recommended).

Here are the safest options for your ketosis (carbs mentioned for the Grande 16 oz drink sizes):

NOT-SO-KETO, BUT . STILL AN OPTION

After the extremely low-carb options mentioned above, the Starbucks menu features quite a few drinks that you can order if you do some math beforehand (go through the steps 1-4 in one of our previous guides).

Ranging from 7 to 20 g of carbs per one Grande serving, these beverages are too dangerous to drink mindlessly if you want to stay in ketosis—but are still perfectly fine if you prepare yourself beforehand.

A quick reminder: if you want to enjoy any of these drinks without going out of ketosis, please calculate your daily carb limit with the instructions in any one of our previous guides.

According to the official Starbucks nutrition facts, the Iced Starbucks® Blonde Vanilla Bean Coconutmilk Latte packs just 16 g of carbs. So, why isn’t this drink in the previous list of options? After all, that carb content isn’t too high, right?

The problem is in the ingredients of the drink. Macros aren’t your only concern.

If you scroll down the drink’s official page, you’ll see that it contains coconut milk and vanilla bean powder—and both of these components contain sugar.

The problem is that most keto-experts agree that not all carbs are equally good during the keto diet. Simple carbs (any kind of sugar, fructose, most syrups, etc.) cause a sudden spike in blood glucose, forcing your body to go back into a carb-fueled state to deal with the sudden rise in carb intake.

In other words, it’s one thing to get 19 g of carbs from milk or milk foam (like with Caffè Latte and Latte Macchiato), but it’s a whole different story getting even 16 g of carbs from sugar or syrup.

Here’s a quick list of ingredients you should look out for in ANY Starbucks drink:

But what if you really, really, REALLY want to try that forbidden drink?

Well, here are some handy keto tips you can use to make your Starbucks drinks less dangerous for your ketosis (note: ”less dangerous” doesn’t mean ”not dangerous,” so choose wisely):

- Whipped cream can be swapped for heavy cream

- Some syrups have a sugar-free version (like Vanilla, Mocha Sauce, and Cinnamon Dolce), just ask your barista to use those instead of the sugary ones

Visiting Starbucks on keto is a dangerous adventure: so many delicious temptations, argh!

And still, remember that the long-term benefits of ketosis are absolutely worth the trouble. Moreover, you have quite a few safe options to choose from, so stay alert, and everything should be just fabulous.

Just remember that if you don’t specify the changes you want, your barista will add the standard (sugary) ingredients, so it’s important to say you want sugar-free syrups in your drinks, clear and loud.