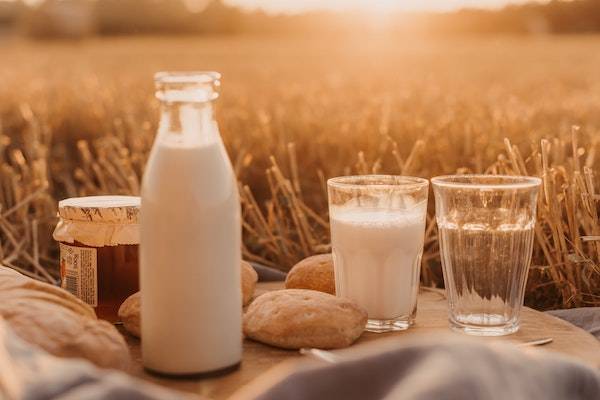 Did you know that cow milk isn’t your best choice of milk on the keto diet?After all, a single cup of whole cow milk can pack over 10 g of carbs! Of course, that’s not too much, but still enough to be taken into account. So, what are your alternatives?In this review, we’ll take a good look at 8 different types of milk and answer the question of what is the best milk to drink on keto!

The main problem with cow milk is that it’s extremely rich in carbohydrate. In other words, you can add a few tablespoons of milk to your morning coffee without worrying much, but that’s your limit. Of all options out there, whole cow milk is one of the worst types of milk to drink on the keto diet. By the way, lactose-free milk is just as high in carbs as whole milk.

Hands down, rice milk is THE worst milk substitute due to its over-the-top carb content. Nothing to add here, it’s just awful for keto. In fact, the only reason why we added it to this rundown is to help you stay away from it.

Slightly better than rice milk, but still terrible. A total no-go at all times.

In terms of carbohydrate content, soy milk usually packs just as much (if not more) of the stuff as regular milk. Well, at least it’s not some 17 to 22 g like we’ve seen in oat and rice milk.

In general, soy milk has considerably less fat and a bit less protein than regular milk, so the only reason why you might opt for it is if you’re vegetarian or vegan.

Otherwise, stick to regular milk or look for something better for your ketosis, like the options below.

Coconuts are fabulous on the keto diet, with coconut oil being one of the best sources of healthy fats EVER. So, does that mean coconut milk is also great?

Well, it’s certainly more keto-friendly than whole milk and soy milk due to its significantly lower carb content. On the other hand, coconut milk packs a measly 0.5 g of protein and somewhat less fat than cow milk, so it’s not very nutritious.

In other words, it works great as a coffee creamer or a keto-friendly milk substitute for different recipes, but you won’t get a lot of nutrients from it.

Flax milk is probably one of the best types of milk substitutes for those times when you’re really restricted in terms of calories or carbs. With just 1 g of carbs per cup, it’s a fairly safe choice for your ketosis, no matter how you look at it!

The bad news is that flax milk is relatively hard to come by, with coconut and soy milk being much more popular options.

Accessible, affordable, mildly nutritious, and fairly safe for ketosis. Almond milk is probably one of the best types of milk during the keto diet. It’s not exactly fabulous in terms of nutrients, but it can serve as a reliable everyday option for most people.

Pea milk is a relatively new type of cow milk substitute created by Ripple. In terms of macronutrient content, this option is probably the closest you can get to a keto-perfect milk. With less than 1 g of carbs per cup, this beauty packs almost 5 g of healthy fat and 8 g of protein!

The only downside is that this product is not suitable for people with allergies to legumes (peanuts, soy, beans, peas, and others). Also, pea milk can be hard to come across in some areas.

However, if you’re not allergic to peas and the Ripple pea milk is sold near you—go for it, it’s just amazing for keto!

Here’s a quick recap of what we covered in this review, to help you master the facts:

Stay away at all times: rice milk, oat milk

Pea milk is the best type of milk during the keto diet. Period. It’s extremely low in carbs but features a fat content almost as high as coconut milk does. The downside is that it can be hard to find in your local store, and some people are allergic to peas.

If that’s the case, flax milk and almond milk are two fabulous options.