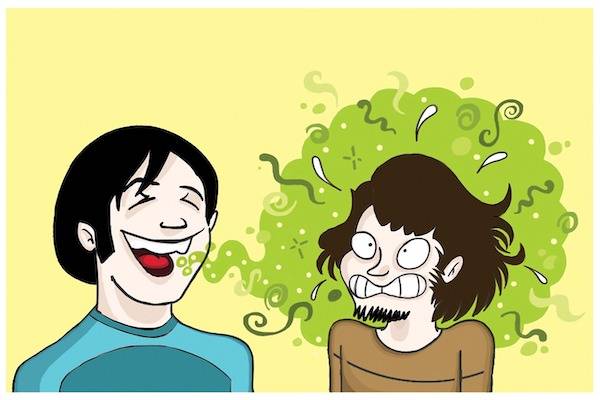 The ketogenic diet does not have a lot of side effects and is generally considered to be safe for anyone to adopt. However, some people experience quite unpleasant changes in their bodies, and while those typically subside within a week or two, you should still be aware that they are possible.

Below you’ll find a list of the ketogenic diet side effects that are incidentally reported in scientific studies and personal testimonies, along with brief recommendations on how to alleviate them.

Side effects resulting from dehydration and loss of salts

Ketone bodies do not increase urination, but dehydration typically accompanies ketosis. So why is that? Well, the thing is that the human body stores carbs in form of glycogen, and every gram of glycogen binds3 to 4 grams of water. Now, during extremely low carbohydrate intake, the body depletes its glycogen stores to compensate for the lack - and thus the bound water is released and lost, taking some essential salts along the way (mainly potassium and sodium).

If your intake of water and salts is not optimal, the following side effects may be experienced due to their loss.

Minor cramps may suggest a lack of potassium, magnesium, calcium, or be the result of general dehydration. Don’t panic and control your water intake (aim for 35 to 40 ml per kg or 0.54 to 0.6 fluid ounces per pound of body weight). Symptoms should subside within a week. Otherwise, check your blood salts levels and increase your intake in natural sources of the deficient salt.

Constipation is one of the most typical manifestations of dehydration and does not require any specific treatment besides restoring your water balance. Additionally, make sure to have enough fiber-rich vegetables in your diet (remember that you are allowed to have up to 35 grams of carbs per day while on keto), as they promote healthy bowel movement.

Heart palpitationsAnother common sign of dehydration and potassium loss, heart palpitations during keto are not dangerous, although still utterly unpleasant. This side effect typically subsides within a day or two once you restore water balance or start taking a multivitamin containing potassium (but make sure to follow the recommended dosage).

These side effects are not to be confused with the keto flu, which is another term for keto-adaptation. The keto flu is always transient and does not require any major alterations in your diet besides keeping track of the macros, water, and salts intake.

On the other hand, the following side effects might suggest you tweak something in your keto diet, as they may be seen even in people who are fully adapted to ketosis.

Reduced physical performance during the keto flu is considered to be normal. After successful adaptation, most people report increased endurance and energy levels. Professional athletes and bodybuilders, however, might observe decreased physical performance even after the keto flu, as the intensity of their exercises exceeds the adaptive potential of their bodies. A quick and easy fix to this consists of trying out one of the special variations of the keto diet. Specifically, this would be either the targeted ketogenic diet (TKD) or the cyclical ketogenic diet (CKD), which contain increased amounts of carbs to fuel optimal physical performance.

Lactating women sometimes report decreased milk production during their keto-adaptation, but this usually subsides once the keto flu is over. Remember that going keto is quite stressful for beginners, and stress has a detrimental effect on lactogenesis (milk production). To support the process, you may need to increase your caloric intake, consider taking multivitamins, or consult with a qualified physician for further guidance.

Although this isn’t very common, some people may have a hard time adapting to the increased fat intake that’s essential for reaching ketosis. Specifically, the following digestive symptoms may be observed:

Chronic health conditions such as diseases of the liver, gallbladder, and stomach may contribute to the development of these side effects.

If you know that you have a sensitive stomach or liver, it is important to increase the amount of fat in your diet gradually. For instance, if you follow a typical Western diet consisting of about 33% fat, aim for 35% during the first couple of days, then increase this number by 5% every 2 to 3 days until you reach the goal of 70-75%.

Also, don’t worry if you suddenly find your total blood cholesterol levels going through the roof. In reality, this is due to an increase in high-density lipoprotein (HDL, ”good cholesterol”) which is known to reduce cardiovascular risk.

Essentially, ketosis is a state in which your body produces ketone bodies (ketones) from fat and uses them as a source of energy. ”Ketones” is a collective name for three specific substances:

Part of these ketones is excreted via urination, sweating, and respiration, and the excreted amount of ketones varies greatly from one person to another. In some people, the following side effects may be seen:

Sometimes called ”keto breath,” this is observed in people who have a lot of acetone in their breath. This isn’t dangerous or anything, and usually subsides within the first 2 to 3 weeks of going keto. Some people never experience it in the first place. For those unlucky ones, the side effect can be easily alleviated with the help of sugar-free gums, intensified oral hygiene, and refreshing oral sprays.

Part of the acetone produced during ketosis is excreted via perspiration (sweating). If you have sensitive skin, this may result in the so-called ”keto rash” - spontaneous irritation and itch during the first weeks into the keto diet, especially after physical exercise or during hot weather. To somewhat alleviate the condition, it is recommended to shower frequently and opt for highly absorbing clothes. As a rule, the keto rash stops altogether after your body gets fully used to increased ketone levels.

As you see, the possible side effects of going keto are generally mild, even when experienced in the first place. And the best part is that they go away by themselves in most cases, so there’s really nothing to worry about. Just make sure to stay hydrated at all times and follow a healthy eating plan in accordance with the universal keto principles.